In the decades of the 1920s and 30s, more activities were included in Community House’s offerings, including Sunday school, religious services, and recreational and social events. A Boy Scout troop was also added. In 1936, the first day nursery (child care center) in Grand Rapids was opened at the Methodist Community House. Lela Powers was the first Director. This program was soon expanded to offer services for 20 pre-school children. During World War II, the staff was enlarged to include two full-time workers and a housekeeper. 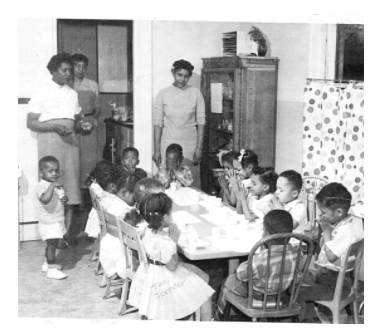 The newly organized Woman’s Society of Christian Service became the sponsor of Community House. Lela Powers continued as Director, assisted by Katherine Strover and a number of volunteers. A new innovation in programming was introduced by the Youth Commonwealth, an organization of the Grand Rapids Police Department working with older boys in the area.

Having served at the Community House for 15 years, Miss Powers was granted a sabbatical year for rest and study. Lillian Ellis was appointed Director. Around this time, the fire department served notice that the building was about to be condemned as unsafe for children. It was estimated that $20,000 would be needed to refurbish the building. The nursery school was discontinued and other programs were moved to different locations.

During the next five years, important decisions were made to sell the condemned property and relocate. A property at 904 Sheldon Avenue SE was purchased, remodeled and redecorated. Funds were also raised to build a nursery school unit. Construction was completed by December 1956. Under Mrs. Lawrence (Bunny) Voss, the new Director, a threefold program was developed, including a day care center, group work and a counseling program.

Doris Degraff served as the next Director with Mrs. Margaret White as Program Director. Under their leadership, programming continued to grow, offering school-aged children activities such as sewing, dancing, choir, wood working, Camp Fire Girls, games day and nutrition classes in cooperation with Sheldon School. There was also a mother’s sewing class.

The first summer day camp program was offered for older children. Summer visitations, in cooperation with the Council of Churches, were also initiated. This provided opportunities for children from urban neighborhoods to stay with families who lived in rural areas and small towns. Additional opportunities for participants included a thrift shop, where used clothing and household items were sold at a small cost. Family living classes for ADC mothers were held in cooperation with the Home Extension agent.

Day care continued in two rooms, serving about 30 children. During this time, the Board of Directors was re-organized under a new constitution and bylaws. The base of authority was broadened to include more people, with built-in checks and balances in the financial operation of the agency. The membership of the Board was changed to include more neighborhood people, more non-Methodists and more men, both laity and clergy.

Yearly evaluations between staff members and the Personnel Committee were instituted. An annual general meeting was held each spring. A Program Committee was also established to evaluate the services of Community House. Public relations efforts were expanded by the creation of a slide show which was used throughout the conference.

Increasing the ability of children, youth, adults, and families
to succeed in a diverse community.

Find us on social media: